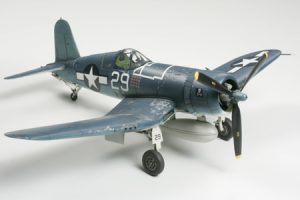 This is a Plastic Model Kit.

Introduced into service in 1942, the Vought F4U-1 featured inverted gull wings and a massive 2,000hp engine spinning the largest propeller mounted on a fighter at the time.

While the fighter performance and toughness was quite impressive, deficiencies such as inadequate forward visibility, restricted all-round visibility due to the early frame-like canopy, and the tendency for the left and right wings to stall at different speeds led to various improvements being added throughout production, eventually resulting in the F4U-1A version.

These improvements included a longer tailwheel leg for better forward visibility, a new canopy for better all-round visibility, and an almost unnoticeable 15cm ,stall strip fixed to the leading edge of the right wing to ensure both wings would stall at.

Kit depicts a final F4U-1A Corsair production version with all improvements or versions at different stages of the improvement process.

Parts for 1000lb. bomb, external fuel tank, two types of propellers, and two types of tailwheel are included to provide many modelling possibilities