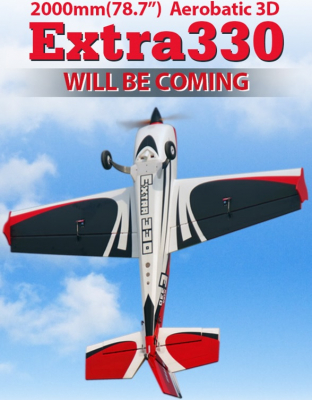 Known for pushing the limits of R/C, FMS is proud to announce the 2000mm Extra 330- one of the largest production foam aircraft to ever grace the skies.
FMS has committed a significant amount of resources and all of its experience, along with information gathered from its worldwide community of top pilots to ensure that this aircraft
would be the pinnacle of R/C aerobatic aircraft. The Extra 330 redefines what a foam aerobatic aircraft can be.
Building on the advanced construction and design of its predecessors, the Extra 330 integrates a strong yet lightweight hollow wing structure, carbon fiber wing spars, carbon fiber landing gear and highly efficient large wooden propellers- which effectively reduce vibrations while being highly efficient. Featuring a monstrous 6860 motor, Predator 90A High-voltage ESC and Predator high-voltage 75g servos, the Extra 330 will perform any maneuver the pilot thinks of. High speed passes, inverted fight, loops and point rolls are a piece of cake when its powered by the recommended 12S battery.
As the Extra 330 is a large aircraft, FMS’ designers have made the wings and tail surfaces easily detachable- for easy storage or for transportation. Be the wow factor of your local field with the FMS 2000mm Extra 330!