This kit is perfect for designing the ultimate U.S. Navy Scene Diorama. Aircraft Tug or “Moto-Tug” tractors, as they were nicknamed, were manufactured by Ford. 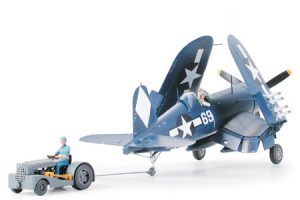 The speedy Corsair debuted as the 1st US fighter plane to overcome the 400mph (644km/h) barrier. However the initial production version of this aircraft, the F4U-1 “Birdcage”, was not without its problems. The port wing stall often gave the Corsair unstable landing, and the long nose and framed canopy hindered visibility. These weak points necessitated the development of improved versions such as the latter developed F4U-1A with 18cm raised cockpit and raised rear landing gear. The F4U-1D featured clear vision canopy (two side frames removed) and had two pylons under the centre wing section that could carry up to a 1,000lb bomb payload. In 1944 the F4U-1D Corsair was formally deployed as a carrier based aircraft. Read More